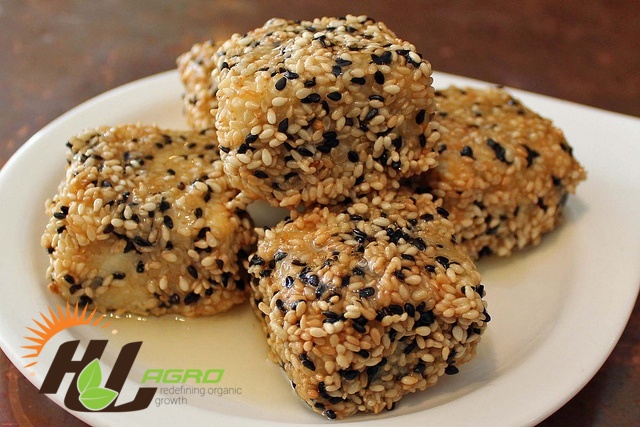 Sesame is an annual wild flowering plant domesticated and grown in the tropical regions of the world mainly for its edible seeds. All nature is of course magic and all magic is perhaps nature and nothing exemplifies this more than food. Sesame, one of the oldest known plants (and certainly one of the oldest known oilseeds), is native to India and has always been used in many different food preparations. Being a source of fat, it has been traditionally valued as a warm and life-giving food.

Makar Sankranti, the day when the sun moves into “maker” or Capricorn, signifying the end of winter, traditionally also a time for the new year in many agrarian communities around India, is associated with “til” or sesame. In some lores, this is the seed blessed by Yama, god of death, and hence associated with immortality. In others, it symbolizes Lakshmi, Vishnu’s consort who brings in prosperity. It is easy to see the agrarian references. As a warming food and being rich in fat (and according to modern science, and good ) it is but natural for til to be a symbol of both longevity and prosperity and thus one of those ingredients that find pride of place on “auspicious” days such as Sankranti, when the darkness of winter is over and the sun is reborn to bless us with life and fertility.

Til is donated around of the year traditionally and, of course, we all get to sample the joys of til laddoos, til , and sweets like in northern India.

Keeping health reasons aside, I love the nuttiness of these seeds. As such they are invaluable in dressings for salads and on sauteed vegetables, or buns. You can use the sesame seeds for any of these preparations even if you don’t want to make traditional the  out of them. Indian cuisines apart, sesame seems most predominantly used in Arabic foods as well as in Japan, where tan and black sesame seed varieties are roasted and used to make .

Gomashio is actually a fairly easy-to-make seasoning that you can put on the table and use as a sprinkling on just about anything — from rice and tofu to soups. You can toast unhulled sesame seeds and grind them with sea salt in about a 10:1 ratio. It is used to sprinkle on too.

The all-pervasive, all important Tahina paste that goes into dips such as hummus. The taste of the chickpea dip is balanced and a note of complexity is added with the Tahini that is spooned into the mix. The oily paste made from toasted and hulled sesame seeds goes into not just hummus but also baba ganoush and all the Arabic .