Sesame shows up in the cuisines of so many different cultures: the seeds top your ramen, the oil flavors your dressing, and tahini is the essential that turns chickpeas into hummus. The tiny seeds—nearly 10,000 of them make up a single ounce—grow across India, China, Mexico, and Sudan and appear in dozens of distinctive dishes, from snacks to desserts. But they often get overlooked for the subtle crunch and rich toasty flavor they deliver, with many home cooks still unsure of what to do with them beyond observing how nicely they decorate a hamburger bun. No secret ingredient to date has offered the opportunities of the sesame seed. It is a globetrotter, appearing on hamburger buns in California and bagels in New York. From halvah in North Africa to oil in India. In dim sum in China; on sushi in Japan. Its applications are sweet and savory. It is a ubiquitous culinary confetti, nutty and fragrant and substantial. Comfort food, in a way, to the whole world.

From a gastronomic perspective, sesame also comes in a variety of preparations. First, raw and white. Then white and toasted. Black sesame seeds are the mysterious brunette to the more common blond. Sesame paste, known as tahini, is found in jars in raw and toasted varieties. And sesame oil, too, comes in raw and toasted iterations. And while raw sesame products are known for their healthy properties, the toasted variations recall that sensory nuttiness and exotic fragrance for which the seeds have become world famous. Here’s a rundown on the many forms that sesame seeds take across the worldwide culinary:

The same process by which the peanut turns into peanut butter, by extracting the oils within and mashing to a paste, is what turns sesame seeds into tahini. The spread is incredibly versatile and nutritious – it's a good source of calcium, iron and dietary fiber.

In North Africa, Greece, Israel and the surrounding area, tahini is an essential part of the diet. It is eaten on its own, used as a garnish and condiment, and added to foods such as hummus and baba ghanoush.

Halva is any of various dense, sweet confections made in the Middle East, Central and South Asia. It is a traditional sweet made with honey, flour, butter, and sesame seeds or semolina, pressed into loaf form or cut into squares. Halvah comes with a variety of colourings and flavourings. Its texture is characteristically gritty and crisp. In some versions, sugar and nuts, often pignolia nuts or blanched almonds, are substituted for the more traditional honey and sesame seeds. In either case, the sweet syrup is added to a sautéed mixture of butter, nuts, and farina. These are blended thoroughly, then covered and cooked until all the syrup is absorbed.

The sesame candy is often sprinkled with cinnamon or served warm or cold with whipped cream. Nowadays halva is much appreciated dessert in almost half of the Europe. Nevertheless, the Middle East still offers the biggest variety of halva. But this sweet is more and more on demand in other countries, notably UK and US, because of the great beneficial properties.

Pasteli, the sweet and moreish sesame seed and honey bars dotted with roasted nuts is incredible in taste & so easy to make at home. It is usually made by mixing the seeds in a thick jaggery syrup and either rolling the mixture into balls or making candy bars. Pasteli is a great snack. It goes excellently with Mediterranean style rose and lemon flavored tea. You can eat them whenever you need an energy boost, like when you are experiencing a post-lunch afternoon slump.

Bagel is an elongated bread covered in sesame seeds. It is not actually boiled before 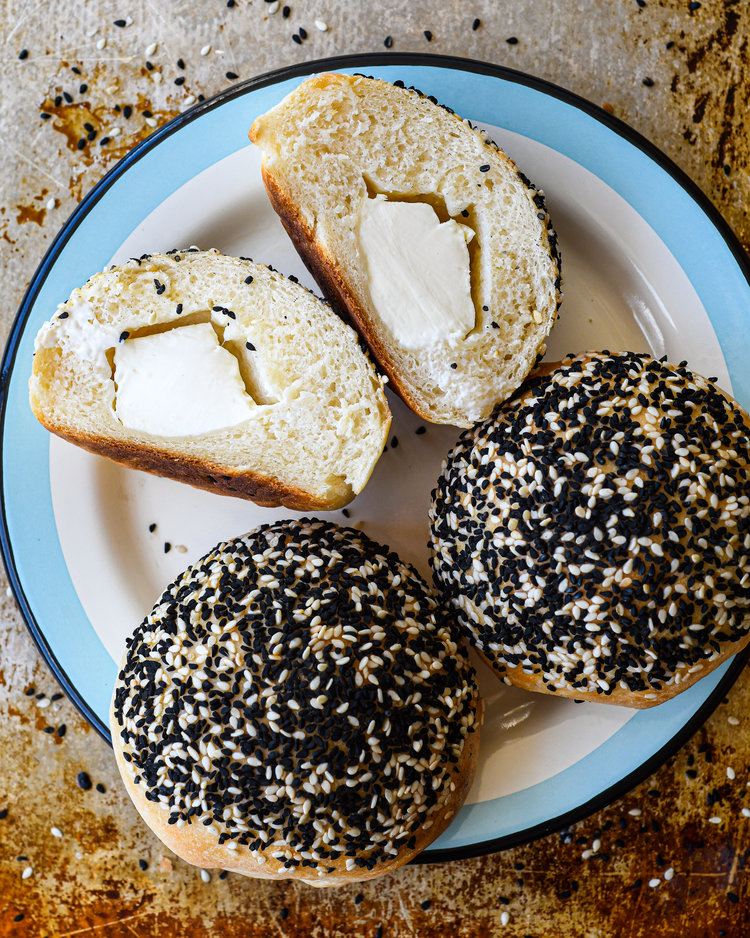 baking like the other Bagels, but this particular version has a Philly pretzel twist with the addition of a baking soda solution brushed all over the tops before baking until golden.

If it's topped with sesame seeds, you know it's going to be good. It's like an earthy, nutty cherry on top of your bread, bagel or pastry. In Jerusalem, you'll find this seed smothering a massive, golden-brown bread that's sort of half pretzel, half bagel. They're called, appropriately, Jerusalem bagels.

Hummus is an incredibly popular Middle Eastern dip and spread. It is typically made by blending chickpeas (garbanzo beans), tahini (ground sesame seeds), olive oil, lemon juice and garlic in a food processor. Not only is hummus delicious, but it is also versatile, packed with nutrients and has been linked to many impressive health and nutritional benefits.

Moreover, hummus is naturally free of common food allergens and irritants, such as gluten, nuts and dairy, which means it can be enjoyed by most people.

With a nutty crunch and sweet flavour, sesame seeds are a popular ingredient used extensively in Asian cooking. They come in distinct colours - black, white and brown, and are also used in extracting sesame oil. Much like other cooking oils, sesame oil lends well to the flavours of the dishes being prepared. In the kitchen, the seeds can be used in numerous ways to prepare a range of delicacies - from traditional sweet treats of the country and sumptuous snacks to lip-smacking accompaniments and atop garden fresh salads. Apart from their distinct flavour, these seeds also come packed with a bevy of health benefiting properties.

A combination of essential vitamins and minerals makes them a perfect addition to your everyday meals. Roast them, roll your favourite snacks in them, cook with them or simply have them raw, the choice is all yours.